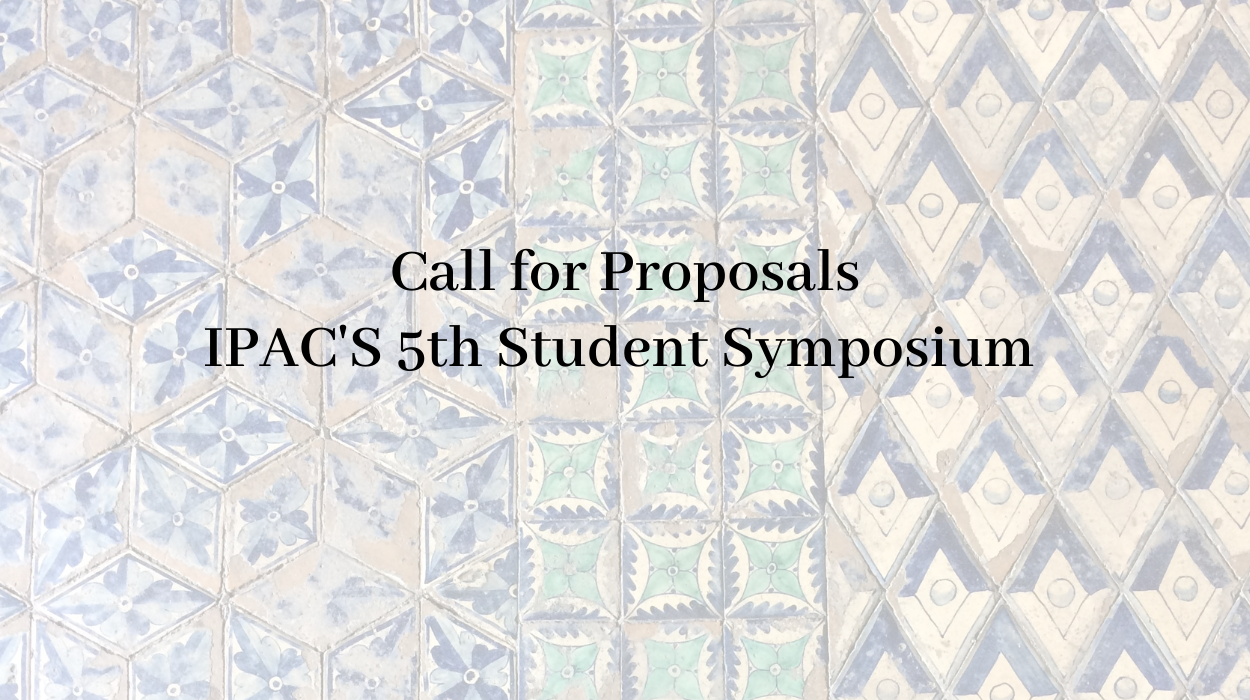 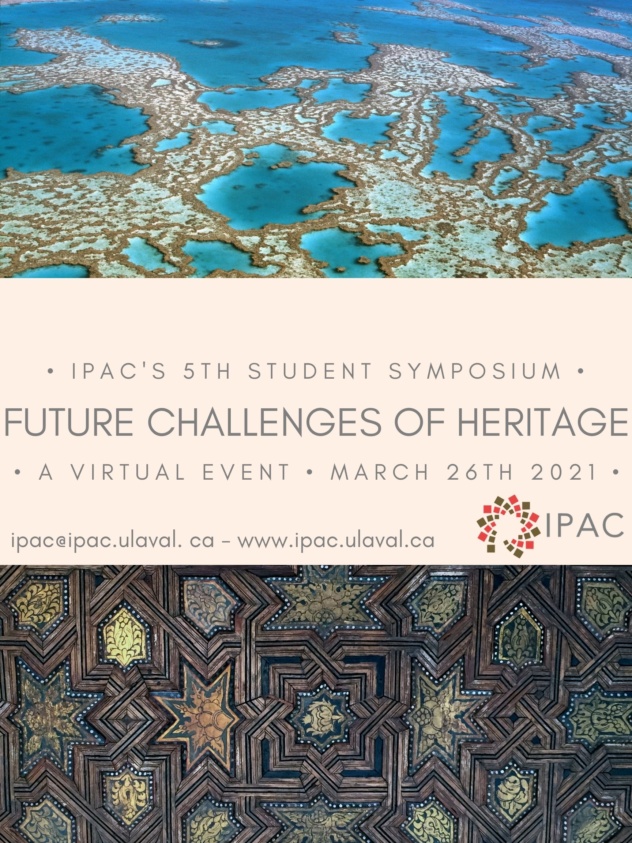 This fifth edition of the Institut du patrimoine culturel de l’Université Laval (IPAC)’s student symposium is meant to be a space of reflection and discussion upon cultural heritage and the challenges its many forms face in the future, particularly in regard of change, whether it be political, socio-economical, or environmental. Contributors from a variety of backgrounds and disciplines will each shed light on the hopes and fears of actors of heritage (researchers, professionals, stakeholders, etc.) They will contribute through their propositions to a greater valorisation of research in the field. For never has the need to anticipate the evolution of the process of grating heritage status been more crucial, on a pragmatic as well as conceptual basis. Today, as conceptions and contexts of heritage fluctuate, a paradigm shift is inevitable. In turn, heritage practices must evolve, and new questions arise. How can we harness the ever-growing potential of new technologies in valorizing monuments, works of art, but also social practices ? Or is on the other hand the future of heritage compromised by the need to acclimate to increasingly fast-paced technological evolution ? Where is the border between dynamizing tools and hampering competition ?

This virtual symposium will examine how young heritage researchers employ new tools, concepts and paradigms of their discipline under three sub-themes. First, a reflection will center on the major and inevitable challenges brought upon heritage and its actors by the environmental crisis at our doorstep (sub-theme 1). The symposium shall also explore contemporary debates and research on the democratic and inclusive aspects of heritage, in short how it is an actor of social mobilization (sub-theme 2). Finally, how might we imagine mutations, and even “reinventions” of heritage and its practices through the influence of new technologies, shifting economic realities, and issues of governance (sub-theme 3) ?

All these questions will help to define a prognostic for future challenges of heritage as a social issue.

SUB-THEME 1 – HERITAGE AND THE CLIMATE CRISIS

Well explored by the international scientific community, the present and anticipated effects of the climate crisis are increasingly becoming of concern for heritage actors and thinkers. Cultural heritage has often been envisioned as a product of the adaptation of humanity to its environment, and therefore is inextricably linked to the present ecological paradigm. Sustainable development is already an integral value in the heritage field through the imperatives of protection and transmission. Traditional knowledge, especially pertaining to food practices, the cycle of seasons, and the use of medicinal plants, is increasingly studied through the prism of a possible contribution in fighting climate change. The process and politics of heritage making of natural spaces and territories also helps to preserve biodiversity and at-risk ecosystems. Protected natural sites also serve as an integral part of scientific research and advancement, which will in turn help in the fight for one of the biggest challenges of the 21st century.

Even though heritage is being lauded as a tool in the fight against climate change, it is still incontestably menaced by its actual and anticipated effects. For an example amidst so many more, rising water levels threaten many islands such as East Renell, in the Solomon Islands Group, a World Heritage site placed on UNESCO’s List of World Heritage in Danger since 2013. Therefore, in a context where major climatic changes are to be expected and anticipated, how can we envision the future protection of heritage, whether it be natural, material or intangible ? What role(s) must the scientific community, heritage holders and institutions, museums, governments and NGOs play in this fight ?

If heritage is found in many forms and places, mobility, social inclusivity and accessibility are still major challenges in the field. Touristic sites, protected cities, local museums, historical sites, and even traditional practices: every type of heritage is influenced by the political, socio-economical and environmental paradigms of the day, be they favorable or not. The last ten years have also seen the very notion of heritage transformed : in a globalized, hyper-connected world and a culture of the hyper visual, heritage must now be an agent of democracy by its intelligibility and inclusivity, by and for all. Dialogue between stakeholder communities and ever-changing and ever-growing publics will be key. The public(s) is now more than a mere passive receptor, but a collaborator, eager for active participation. Vulgarization, new technologies, interactivity and the creation of meaningful experiences of heritage are all ways to be explored to connect with it.

Culture preserved from the past, whether material or intangible, is born to transform itself and mutate, to face many challenges. Tomorrow, will the Seven Wonders of the World still be accessible to all ? How do human and material migrations impact heritage ? Will traditional forms of governance such as regional, national and international institutions and their politics, still be relevant amidst rising contestations ? How may we collect, preserve and valorize and interact with heritage in the years to come, while keeping in mind governance, restitution, digitization and accessibility issues ?

Creativity and innovation are now key factors in protecting and valorizing heritage for all actors in the field. They are now in need for actualization, reinvention, in order to create, stimulate and assure interest for heritage from their communities, interest that is integral for preservation. But is reinventing heritage firmly anchoring it in the present, or is it on the other hand a risk for its authenticity? On one side, acknowledging that heritage must adapt to the paradigms of the day is increasingly necessary for its protection. However, the line between reinventing and denaturing is sometimes thin. For example, many consider reinventing churches in other kinds of useful spaces as a way to protect religious heritage ; others may argue that this process removes the spirit of the place, dissolving its essence. To cite but one example, the church Saint-Esprit, in old Limoilou, in Québec, has been reinvented as a circus school in 2003. This delicate dilemma also impacts intangible heritage, such as the epic arts. It is possible to preserve tales from oral traditions by taping and archiving, but is that not diminishing their cultural worth if it means that they stop being passed on from generation to generation ? Finding the right balance in the question sure is complex.

In the last several years, the exponential advancements in the development of new technologies seems apt to offer fertile solutions to many of heritage’s current challenges. Possibilities in conservation, valorization and diffusion are ever-increasing. The growing place that the digital now takes everywhere, not just in historical sciences, means that we must now reevaluate how we perceive and conceive heritage. The sheer volume of events, symposiums and seminars dedicated to the interrelation of heritage and new technologies is a proof of the matter. Questions such as the use of 3D reconstructions of historical monuments, mediation through social media, and the very notion of the numeric, are but a few examples of what there is to explore in the field. What is digital heritage ? How do new technologies impact heritage, positively and/or negatively, and what are their limits ? Does the use of technology suffice to say that heritage is reinvented, anchored into the present ? New technologies are surely apt in reinventing heritage, but only if its actors know how to use them wisely.

Talks in the IPAC’s virtual symposium will be held in a whole day, on Friday, March 26th, 2021. Presentations are to last for 20 minutes. Visual supports such as PowerPoint and Prezi are recommended.

The symposium will be held exclusively online. Details on the platform used will be communicated shortly. Participating as a member of the audience is entirely free.

Please fill in the APPLICATION FORM and send it at ipac@ipac.ulaval.ca up to February 10th, 2021. Answers will be given as soon as possible. Proposals submitted in any other formats will be immediately returned for correction.

We encourage proposals pertaining to a specific field study or cultural community. The symposium will be held mostly in french, but talks in english are welcomed.

Our thanks to Laura Charette and Hélène Bernardot who worked on the elaboration of the 2020 edition of the symposium.

In the context of the COVID-19 pandemic, the IPAC’s 5th student symposium could not be held in March of 2020. As such, the student committee chose to present the same theme as this defunct edition. Students whose proposals had been retained have been encouraged to re-submit them, and will be prioritised for this edition.

Keep an eye on our Facebook and Web pages to catch new developments !

For any questions not answered in this article, feel free to write at ipac@ipac.ulaval.ca. 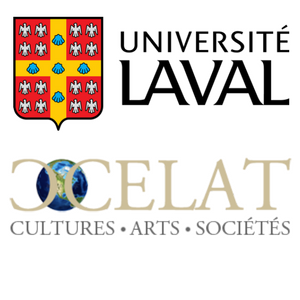